Luke started Judo when he was six years old and since then he has represented both Wales and Great Britain on numerous occasions.

He has an impressive competition record winning the senior British Championships at under 81kg three times. His eleven international ‘open’ medals include winning the Canadian Open twice and taking silver and bronze medals at the British Open. Luke is also a World Cup medallist, took bronze at the 2002 Commonwealth Games, won silver in the European Team Championships and placed 7th at the Senior European Championships. He was the Olympic reserve at 81kgs for the 2000 Olympic Games in Sydney.

Luke retired from international competition in 2005 and became a qualified coach so that he could work as an elite coach for Camberley Judo Club. He is a qualified BJA level 3 coach and EJU level 4 high performance coach. Luke has a foundation degree in sports performance.

Since 2006 Luke has also worked as a support coach for the Great Britain Judo team. This has involved coaching at Junior European/World Championships, Under 23 European Championships and Senior European/World Championships. Luke was honoured to be chosen as an Olympic Coach for the London 2012 Olympics and matside coached Karina Bryant to her bronze medal. In 2014 Luke was asked to coach for Team England at the 2014 Commonwealth Games which allowed him to matside coach Ashley Mckenzie, Danny Williams and Owen Livesey to their gold medals. 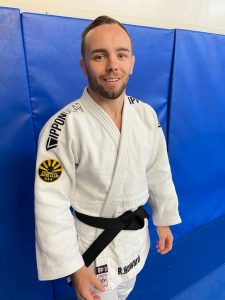